The preservation of our national heritage is central to the mission of DAR. Omaha Daughters, in conjunction with other Nebraska chapters, have been the impetus for several preservation and commemorative projects locally and regionally.

Rededication of the Ft. Calhoun Lewis and Clark Monument 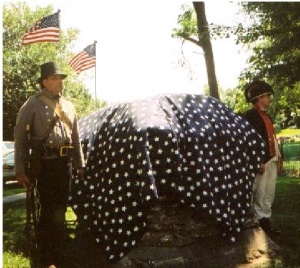 In 1904, the Nebraska State Historical Society (NSHS) and the Nebraska Daughters of the American Revolution (DAR) helped dedicate the Fort Calhoun Lewis and Clark monument that commemorated the centennial of the historic 1804 council with the Otoe-Missouria. One hundred years later, the Nebraska State Historical Society partnered with Nebraska Daughters to celebrate the rededication of the monument. The monument was rededicated as part of the Lewis and Clark Bicentennial events held during the summer of 2004.

Sisters Susan and Jane Fiala won first place in the National American Heritage Fiber Arts category for their hand made quilt “Burgoyne Surrounded” complete with the embroidered signature of their Patriot Benjamin Sprake who as present at the Battle of Burgoyne. Congratulations, Jane and Susan!

On June 14, 2012, our chapter celebrated Flag Day at Laurel Hill cemetery in south Omaha. We placed a wreath and a flag at the grave of Real Daughter Elvira Tewksbury. Mrs. Tewksbury was born in 1820 and was the daughter of Revolutionary War patriot, James Walker. An article from the Plattsmouth Journal, dated May 26, 1916, offers interesting insight into the service of Private Walker and the life of Mrs. Tewksbury.

Omaha Daughters also placed 26 flags on the graves of “Forgotten Patriots” in Nebraska. These African-American and American Indian patriots were buried in unmarked graves until a combined headstone was erected to honor their service.

Nebraska pioneers relied upon some of the Native Americans already residing in the area to be scouts for the United States Cavalry. These scouts are regarded as the state’s first military veterans. The Buffalo Soldiers, originally African-American soldiers of the 10th U.S. Cavalry who fought the Indian tribes, are also rarely recognized veterans.  More information on Forgotten Patriots may be found here.